My name is Tim Lones-I have had the Cleveland Classic Media Blog for about 2 and a half years now..What I want to do here is create a listing of NE Ohio Television Stations as a “TV Log”-A permanent listing of just information, Including, but not limited to: Original Airdate Current Network Digital TV Information Current location/address previous addresses Timeline-Including dates of Network changes, premiere/cancellation dates of Notable programs, some important personalities, etc.. I just want this to be a clearinghouse of information that again, will be permanent.

Original airdate October 31, 1948 as WNBK-Channel 4-Owned by NBC Timeline: January 14, 1952 Today premieres-Therefore WNBK is the first station in Cleveland with an early sign-on..

December 1955-Sale/swap with Westinghouse is finalized

September 2, 1957 Barnaby (Linn Sheldon) premieres with Popeye Cartoons, which would be shown on channel 3 well into the 1970's..

1959 The Title "Eyewitness News" is used for the first time for 5 minute newscasts by Pete French and Hugh Danaceau, among others

May 16, 1960 Funsville premieres-Hosted by Josie Carey..Produced by KDKA Pittsburgh, Ms. Carey was already famous for "Childrens Corner" at Public WQED-13 Pittsburgh and for giving Fred Rogers (Misterogers) his start..

May 1, 1961 "Eyewitness News" premieres as a half hour local news show, the first of its kind in the USA..With Bud Dancy, Dick Goddard and Jim Graner.

1962 "Woodrow" (Clay Conroy) premeres, first as a Sunday show, then daily at 9AM, replacing "Funsville" 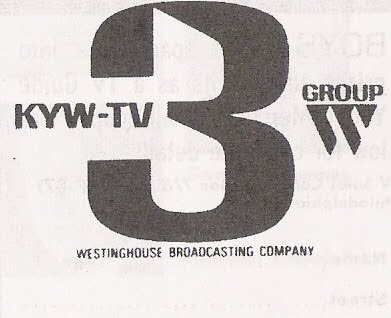 June 19, 1965 The Westinghouse/NBC swap of 9 years earlier had been declared "null and void" by the FCC-NBC returned to Cleveland with the call letters WKYC-TV

September 27, 1965-A half hour news show "3 On The Town" debuts..first hosts were Bud Dancy, Jay Miltner and Linda Hunt. This show went through many changes, finally being canceled as "Our Man Mark" (Mark Russell) August 9, 1968.

1997 Today In Cleveland ends its run..
Tom Haley retires after 49 years at WNBK/KYW/WKYC

2009 Analog Channel 3 leaves the air permanently-WKYC is now on Digital 17 with 2 channels, Regular WKYC and Weather on channel 3-2

1948 "Giant Tiger Amateur Hour" Premieres-Known as the Gene Carroll Show..Lasted for over 30 years..after 1972 hosted by Jim Runyon and Don Webster
1948 Debut of The Paige Palmer Show, which would run in various time slots till 1973..
1948 Linn Sheldon hosted a weekly pantomime record show for Rogers Jewelers-Said to be the first sponsored show in Cleveland..Sheldon also did "Coming Attractions" as the last show of the night-A "visual TV Guide"

1956 Early Channel 5 personality Bob Dale, who hosted many shows on WEWS from 1948-56, including "Dinner Platter" and "10:30 Theater" moves to San Diego California, where he becomes an icon, spending over 40 years at KFMB and KNSD..

Christmas Season 1956 Mr. Jingeling makes his first appearance on Captain Penny...Halles' Christmas Elf was played first by Max Ellis (to 1964) Then Earl Keyes..Mr. Jingeling lasted into the 1980's making the rounds of Channels 5, 8, 3 and 43

1957 Romper Room, after a short time on WJW, begins a 14 year run on WEWS-TV..Barbara Plummer was the well loved teacher on Romper Room, which ran till January 1, 1972

1957 Captain Penny's Evening Show debuts..Later known as "Comedy Clubhouse". "Pooch Parade" and "Jungle Larry" are a large part of the show..lasting till 1971..

August 26, 1957-The One O Clock Club Debuts..For the most part hosted by Dorothy Fuldheim and Bill Gordon..The show lasted till 1964 as competition from Mike Douglas at Channel 3 was said to hurt them..

January 1958 Tom Field , after several years at WNBK/KYW, then a stint with WRCV Philadelphia, moves to Channel 5 as principal 11PM Newscaster..He would stay with TV 5 through the late 1960's..

September 1964 The Big 5 Show premieres, a live rock and roll music show. Hosted by fresh-faced Don Webster, brought in from Canada specifically to host the show..National syndication followed in 1966, with a name change to "Upbeat"..Upbeat lasted till 1971..Webster remained at TV 5 well into the 1990's hosting game shows, talk shows, weather..Even being WEWS General Manager for awhile..
September 22, 1965-The Quarterback Club, a Staple of Channel 5 programming during Browns season since the late 1950's, is first broadcast in Color..
December 25, 1967 John Hambrick debuts as News Anchor..The beginning of a long run of success in the 70's and early 80's with "Eyewitness News"
1968 Adoption of "Circle 5" Logo..similiar to the ABC Owned&Operated "Circle 7"
January 4, 1972 "The Morning Exchange" Debuts..Originally hosted by Alan Douglas and Don Webster..Then for many years by Fred Griffith and Joel Rose with at first Liz Richards and many other fine lady co hosts..This was said to be the model for "Good Morning America"..The Show lasted till 1999..

1980 A series of Comedy Specials from "Cleveland Comedy Company" are shown..Here is the opening slide to one of them..A remake of what looks to be a WEWS station ID from the 1950's.. 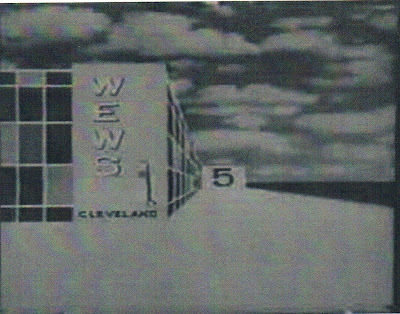 2007 WEWS celebrates its 60th birthday..All under the ownership of Scripps-Howard..arguably the longest ownership of a tv station by a company not owned or operated by a network 2009 WEWS moves to Digital Channel 15.. 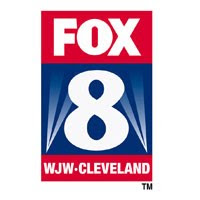 1951-Warren Guthrie hosted "The Sohio Reporter", a 10-minute national news wrapup Monday-Friday night at 11PM until 1963. For much of the time, WSPD-13 Toledo and WKBN-27 Youngstown simulcast Sohio Reporter

1952-Grant Wilson and Alan Freed hosted Afternoon Movies 1952-53 Soupy Hines arrives from Cincinnati to host an afternoon music/comedy show called Soupy's On..After winning a Plain Dealer local TV Award, WXEL cancels the show the next day..Soupy Heads to Detroit, where, as Soupy Sales, he becomes a comedy icon.. December 10, 1953 WXEL moves from Channel 9 to Channel 8 March 2, 1955 After a sale to Storer Broadcasting, WXEL changes affiliation from ABC to CBS..DuMont was pretty much out of business by this time.. April 16, 1956 Call letters change to WJW-TV, to match newly acquired WJW-AM 850 and FM 104.1 February 1957 Linn Sheldon hosted 5PM movies for a time, months before heading over to KYW-TV 3 and launching "Barnaby"

1959-A young WJW-AM Disc Jockey from Detroit, Casey Kasem, did some TV work on channel 8....Of course, Kasem would go on to be one of the top voiceover artists in the business, hosting American Top 40 from 1970-88 and originating the voice of "Shaggy" for Scooby-Doo. He also did some voiceover work for NBC-TV 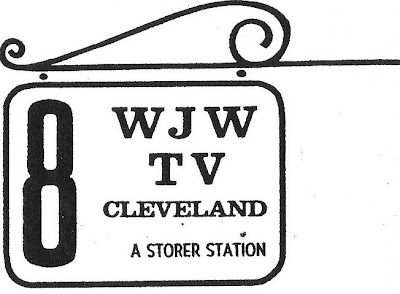 December 22, 1962-Adventure Road premieres with Jim Doney..Longtime announcer/newsman at TV 8..The travelogue program, one of WJW's first color shows, lasted till 1975. After a brief stint at WSUM-AM 1000 Parma, Doney moved to Hawaii, where he worked at the CBS affiliate in Honolulu for many years.eventually retiring there..He also made acting appearamces on Hawaii 5-0..Health problems in recent years forced him to move to Atlanta,Georgia to be near his children.

January 18, 1963 "Ghoulardi" debuts..Ernie Anderson dons the fright wig and glasses for the first time hosting Friday Night Movies.. Beginning an over 3 year run as the most popular local show in Cleveland TV History 1963-64 The "Ghoulardi Craze" spawns 2 more shows-"Masterpiece Theater" Saturdays at 6PM and "Laurel, Ghoulardi and Hardy" weekdays at 4:30PM. By fall 1963 Laurel, Ghoulardi and Hardy would be replaced by "Leave it to Beaver" reruns

1964 Franz The Toymaker debuts at 9AM weekdays..Ray Stawiarski hosts a gentle half hour of crafts and cartoons till the early 1970's

October 23, 1965 "The Ernie Anderson Special" airs on WJW-TV..guests include Tim Conway, Cleveland Brown Gary Collins, Nancy Ray and Chuck Schodowski. Portions of this special have been seen on Hoolihan and Big Chuck, etc..

1966 "Parma Place" a series of Skits on Ghoulardi, become a huge controversy..Parma Leaders put pressure on Channel 8 to stop the skits..Ernie Anderson leaves for Hollywood, where he becomes one of the highest paid, most famous voiceover artists of all time..

March 28, 1966...Dick Goddard arrives at Channel 8, after several months at KYW-3 Philadelphia..He becomes weeknight weatherman while Bob Wells is moved to the Noon Show..Goddard is still with Channel 8 after 43 years

Deember 23, 1966 "The Hoolihan and Big Chuck Show" debuts with Bob Wells and Chuck Schodowski as co-hosts..

August 31, 1979 The last Hoolihan and Big Chuck show is aired. Bob Wells and wife Barb moved to Florida to begin a Christian TV Mininsty, while it was deemed a success in a short time, the program was cancelled..Bob has lived in retirement since, doing dinner theater and coming up to participate in Ghoulardifest..

September 7, 1979 The Big Chuck and Lil John show premieres.."Lil John" Rinaldi is a local Jeweler who had done skits on Hoolihan and Big Chuck since 1970..The show would continue for nearly 28 more years..

September 16, 1985 WJKW calls revert back to WJW after AM 850 is sold again, taking the call letters WRMR..

May 24, 1994 WJW announces it will swap Network affiliation from CBS to FOX

June 2007 Big Chuck and Lil John do their last broadcast

June 12, 2009 WJW-TV moves to its final digital position of 8, after being on DT 31 for much of the digital transition..

Original Airdate:December 24, 1953-Brothers Louis and Jack Berkman found WSTV-9..WXEL-9 in Cleveland moved to channel 8 two weeks earlier to clear WSTV to go on the air.. CBS had also applied for Channel 9 to use as a Pittsburgh-based Owned and Operated station, but was turned down by the FCC..WSTV was a primary CBS affiliate for over 25 years..Westinghouse eventually bought WDTV (KDKA)-2 in Pittsburgh from DuMont to serve as that city's CBS affiliate

1953-Marshall Fatkin, WSTV announcer and weatherman, begins his long tenure with the station..staying with WSTV till 1970..

1955-9 Teen Time began..was on the air till the late 1960's with Stan Scott and later George Wilson as host. Probably the most well-remembered program on WSTV.. 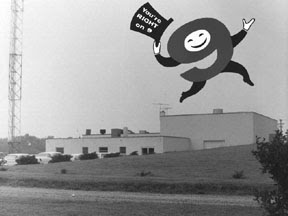 1977-Jamboree In The Hills begins..The 4-day country music festival is carried live every year by WTOV

As there are no logos or any other Test Patterns available at this time for WICA-TV, I borrowed this logo from 1984 of WICD-TV Champaign, Illinois.. (No relation to WICA) Courtesy dougquick.com. If something comes up for an actual WICA logo, etc..I will replace this.. 15 WICA-TV Ashtabula (Defunct)

Three Part Series on the History of WICA-TV from Cleveland Classic Media in June 2007, based on original Newspaper Articles by Carl Feather of the Ashtabula Star-Beacon, published in 1995.

TBN Crest Logo-WDLI has been a Trinity Broadcasting Network Owned and Operated station since April 1986..

1967-Original airtime was 4:30-10PM Monday-Friday News was by WHBC radio newsman John Baker..All programming was in Black and White

1970-Broadcast Day is expanded from 10:30AM-Midnight..Shows like Sherry Lee, Ben Werk, Milton the Milkman, The Cool Ghoul and others are somewhat popular..WJAN also carries the Jerry Lewis Telethon as the Akron-Canton affiliate..

1972-74..The broadcast day is shortened, first Not on the air till 2PM..Then 3:50PM as Janson finds it tough to keep going..Though they do add color..Off network series include The Virginian, Emergency! Dragnet, Lawrence Welk and The Bold Ones..

1977 Janson sells out to PTL Ministries (Jim Bakker), which changes the station to all religious programming..Fundraising irregularities and the threat of a possible FCC probe force Bakker to sell the station to Lonnie Rex and the David Livingstone Missionary Foundation in 1982...

1983 David Livingstone Missionary Foundation assumes control of WJAN, changing the Call Letters to WDLI..Denny Hazen Begins "Plus or Minus 60" on WDLI-He had been a movie host, etc..on WJAN..

April 1986-WDLI is sold to TBN (Paul Crouch) Denny Hazen and wife Marge take "Plus or Minus 60" as a separate program, still airing on WIVM-52 to this day..

1954:Cleveland Plain Dealer Applied to the FCC for the Channel 19 License as WHK-TV

WOIO Logo just after they joined FOX-screengrab
May 19, 1985:WOIO takes to the air as an Independent-Owned and operated by Hubert Payne..Former WKYC Sales Manager

Late 1985:Payne sells the station to Malrite Communications (who incidentally, owned WHK-AM at this time)

2010:Tentative plans (pending FCC approval) to operate a Digital TV translator on Channel 24 in the Akron/Canton Region because of a weak DTV Channel 10 signal..